The term Psychological Contract gained popularity during the 1960s when its description and definitions were mentioned in the studies of behavioural and organizational theorists Chris Argyris and Edgar Schein. Since then, many other theorists and experts have contributed their insights on this subject and propounded several approaches or studies which have unveiled newer perspectives on this topic.

Psychological Contract explains those vital aspects which influence workplace relationships or the human behaviour in an organization. It is a complicated and deep concept, which is still under research and several theoretical studies and interpretations have been attached to it. Primarily the term Psychological Contract focuses more on the dynamics of a relationship between the employer and the employees, is concerned with the mutual expectations in relation to the inputs and the outcomes.

In one of the definitions of Psychological Contract, more focus is laid on what the employer owes to their employees. It has been defined as “the mutual perceptions of the employers and the employees regarding their mutual obligations at work towards each other”. These obligations may be inferred, imprecise in nature, can be understood as some kind of promises or defining of mutual expectations and failure to meet the expectations lead to a breach of trust or faith. 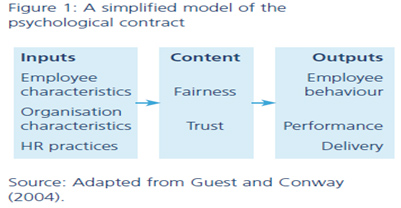 Following are the salient features of Guest Model of Psychological Contract:

The employment relationship has witnessed a change owing to the challenges of the globalization of economies and changes in the way in which businesses are functioning in a global platform.

Few academicians like Rousseau (2004), have explained the distinction between Transactional and Relational Contracts.

The term relational contract is having a broader connotation, which essentially focuses on the quality of relationship which exists between the employer and the employee.

Research evidence in the recent period reveals that the Generation X or so-called Generation Y employees prefer a sense of excitement, community feeling or involvement and life outside the work. They expect to be respected and to be treated as humans. According to Woodruffe (1999), in their thesis stated that employees essentially want their requirements to be fulfilled:

It may not be always possible for the organizations to avoid breaching the deal or the psychological contract, but proactive efforts can be made in terms of explaining the employees the reasons for the change, what needs to be addressed and how it is intended to be handled. Renegotiation of the contract can be made possible. For this, the line managers may be engaged in direct communication with the employees to understand their expectations and issues pertaining to change.

Top-down methods of communication should be avoided while renegotiating the contract with the employees. Crucial steps for the managers during the renegotiation of contracts are:

In a nutshell, it may be concluded that management of change is a complicated process and if not planned and implemented properly may land up the organization into a problematic scenario. Hence effective change management requires a carefully planned and a coordinated effort with complete involvement and committed approach from the employees involved.

Psychological Contract and the research evidence which has been shared through this article may provide a guiding framework to the HR functional department in implementing best practices in HR and best people management practices for deriving maximum success from the implementation of change initiatives across the entire organization.