Why College Education Should Not Be Free?


President Ronald Raegan had once famously said that “Big government is not the solution to the problem. In fact, big government is the problem?” This line is remarkably applicable to the current situation surrounding the student debt crisis. The student debt crisis in the United States has reached epic proportions. The total loans outstanding are worth trillions of dollars. More than 10% of these loans are in default even though the interest rates are at historical lows. If the interest rates are raised, many more of these loans will turn bad. Hence, it would be fair to say that student loans pose a systemic debt crisis in the United States.

Education has been the backbone of the American economy for many years. The reality is that it shouldn’t be so expensive in the first place. The costs of education have shot up ever since the government started interfering with the financing of student loans. Unlike any other loan, students do not have to show means of repayment when they are given a loan. Therefore, there is practically no way to ensure that the loan will be paid back in the future.

Government policies have made it mandatory to give out loans to pretty much every student that asks for it. This is the reason that many young adults, who have no idea about the kind of financial burden that they are taking on sign away their lives every year. Many young and old adults are struggling with piling student loans now. This is the reason that these loans have become a political agenda.

Once again, instead of solving the problem at its root cause, the government is suggesting ways and means of making college education free. Such a move would not solve the problem but instead, exacerbate it. In this article, we will have a closer look at the policy options which are being flouted to make college education free to understand why these policies are flawed:

The most popular policy being proposed is the complete waiver of tuition fees in America. Given the fact that University education is already expensive, this would cost the American taxpayer a lot of money.

Democratic senators have also proposed that $50,000 be waived off from every outstanding college loan in the United States. This extremely generous policy is likely to cost the American taxpayer $1.6 trillion per year! The problem with this policy is that firstly, it will send the American debt through the roof.

Secondly, this policy will not solve the root cause. An abundance of money has made university education expensive. Instead of rationing the money that is given out to the universities, the government is proposing an unlimited supply of money to the same universities.

If this policy is followed, the costs of university education will balloon over the next few years bankrupting hard-working taxpayers in the process. 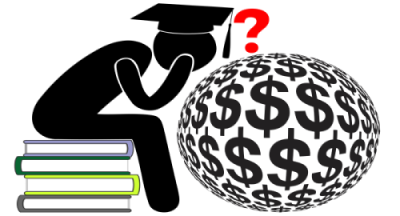 The government loves to play Robin Hood since that helps with building a positive image which has obvious political benefits. There are many senators who say that the proposal of giving away free education will be revenue-neutral. They say that the money for these loans will be provided by a tax which is imposed on the speculative activity on Wall Street.

Such policies play to the popular perception that people on Wall Street have an excess of money, and hence money should be taken away from them. The reality is that each and every taxpayer, even the poor ones, invest money on Wall Street.

The money in the 401(k)’s and retirement accounts is plowed back into Wall Street. Hence, if a tax is imposed on Wall Street transactions, it is still being paid by a lot of poor and middle-class personnel.

Also, Wall Street does not keep all the money to itself. Instead, Wall Street is only a mechanism to transfer money from the savers to the investors. Therefore, if a tax is imposed on this process, the number of investments will be curtailed. A fewer number of companies will get funded, and the job creation process will be impacted. Once again, this will further exacerbate the problem instead of solving it.

Another proposal being suggested by democrats is that the tax cuts being provided after the 2017 act by Donald Trump be reversed. Once again, this would be a problem for the middle class. The middle class was the recipients of tax breaks as well as pay hikes because of the tax breaks being received by the companies.

If these tax cuts are rolled back, many middle-class families will bear the brunt. The problem with this policy is that it forces all people to make an involuntary contribution to benefit only a handful of people. Many of these taxpayers have not been able to attend college themselves. However, the government is forcing them to pay so that other people can attend college. This is obviously hypocritical and ironical.

The reality is that college education is not meant to be free. Instead, it is supposed to be reasonably priced so that middle-class people can afford it. Also, colleges should have endowments wherein merit-based students can also have access to the same educational institutions.

The goal of reasonably priced education can be met with minimum government intervention. The idea of throwing money at the education problem to make it go away has obviously failed and hence must be discarded.