Contracts govern all transactions whether they are between firms or between firms and private individuals. Indeed, in most of the developed world, any transaction or commercial exchange is usually not undertaken without a contract. This trend is also catching up in the developing world where contracts are increasingly becoming the norm. The importance of contracts to our daily existence has been recognized by the awarding of this year’s Nobel Prize in Economics to two economists for their work in contract theory.

What is a Contract?

So, what exactly is a contract and what does it mean for the various parts involved. According to Wikipedia, “A contract is a voluntary arrangement between two or more parties that is enforceable at law as a binding legal agreement. Contract is a branch of the law of obligations in jurisdictions of the civil law tradition” (Wikipedia, 2016).

The terms to note are voluntary, agreement, parties, enforceable, and legally binding.

In other words, the decision to enter into a contract is voluntary meaning that parties to the agreement are not coerced or pressurised in any manner to sign the contract.

The next term agreement refers to the mutually acceptable terms and conditions that are part of the contract.

Again, do note that the terms and conditions have to be agreed upon beforehand and once codified in the contract; they can only be changed with the consent of all parties.

The next important terms are enforceable and legally binding. These are perhaps the most important aspects of a contract since the very purpose of the contract or contracts is to protect people and the parties involved from fraud and cheating by the other parties. In other words, unless the terms and conditions of the contract have legal sanctity and they can be enforced in a court of law, the whole purpose of drawing up the contract is meaningless and futile. 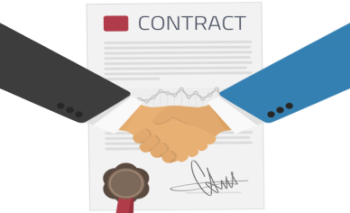 Thus, we can now turn to what happens when either party or both parties renege or go back to the terms and conditions that were agreed upon. In such cases, the parties can approach the courts for enforcement meaning that the penalties in case of non-compliance can be levied upon the offending party. In other words, what this means is that in case one or both parties feel that the other party is not performing according to the terms and conditions agreed upon in the contract, they can then approach the courts for justice.

However, this is easier said than done since proving non-compliance is not that straight and one needs to have the best legal team possible for proving such a case. Indeed, in the context of the developing world, it is often the case that the judicial system takes its own time to reach a judgment on the issue and by this time, the plaintiffs and the defendants or the accusers and the accused is either willing to settle out of court or have lost interest in pursuing the matter further.

Arbitration Centres and their Uses

Having said that, it is not always the case that contracts are unenforceable in most of the countries in the world. Indeed, without the legal protection, firms and individuals would be unwilling to enter into contracts with each other. Just that, more often than not, large firms and multinational corporations usually choose a jurisdiction for arbitration wherein specialized courts or arbitration courts hear such cases and decide quickly.

A popular arbitration centre for most Asian firms is Singapore because of its proximity as well as the reputation as a quick and smooth in addition to effective and efficient centre for arbitration.

To conclude, this brief overview would help you understand the basics of a contract and what they mean for the various parties involved.