Symptoms of an Overheating Economy


The IMF recently asked the Philippines to take measures to rein in its overheating economy. This is not the first time the IMF has made such a statement. In fact, IMF commonly asks countries to take measures to prevent “overheating.” However, the problem is that there is no standard definition which defines the phenomenon of an overheating economy. This is the reason why different nations interpret the IMF’s warnings in a different manner and take different steps.

In this article, we will make an attempt to define the phenomenon of overheating formally. We will also list down some of the symptoms which are commonly associated with the overheating of any economy.

What is Economic Overheating?

The term “overheating” has been borrowed from automobile engineering. In the automobile field, when an engine overheats, it ends up using too much energy to generate excessive heat at any given point of time. This increase in heat causes long-term damage to the engine.

In order to understand the concept of an “overheating economy,” we first need to understand the concepts of actual GDP and potential GDP. The actual GDP is the sum total of the goods and services that were actually produced within a country in a given year. On the other hand, potential GDP is a hypothetical total of goods and services which could be produced in an economy in a given year, if the resources were fully utilized at an optimum level.

The technical definition of an overheated economy is when the actual GDP of a country is more than its potential GDP. Hence, if the human, as well as natural resources of a country, are being utilized more than they actually should be, then it can be said that the economy is overheated. 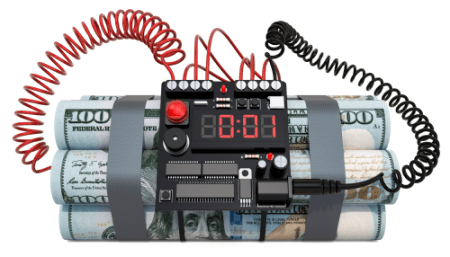 Some of the common features of an overheated economy are as follows:

Hence, if we see interest rates which have been artificially kept low for a prolonged period of time, we should be cautious about the possibility of an overheated economy. The record of economic history is absolutely clear. Once the interest rates bottom out, they tend to go higher.

When the supply of money is artificially increased over a long period of time, the housing markets tend to get overheated. This means that the prices of houses rise way beyond the reach of the common man. In this situation, even the most skilled workers find housing and rents unaffordable. This situation is currently happening in many parts of the world. A report released by HSBC recently ranked cities in terms of their housing markets.

With the notable exception of Chicago, all major cities in North America were thought to be overheated. The housing markets of many cities like Toronto are at their 30-year peaks. Since housing affordability is explained as a ratio between housing prices and median income, poor housing affordability means that the housing prices are rising unilaterally without any corresponding increase in incomes. This is a classic sign of economic overheating.

There is a direct correlation between the level of household debt and what now in hindsight appears to be irrational exuberance on the part of several economic actors.

To sum it up, economic overheating is not something that happens overnight. It is a long process which takes place because of several inappropriate economic policies which have been continued for extended periods of time. Also, there are clear-cut indicators which signal that the economy is overheating. These indicators have been mentioned above for reference.