The Pros and Cons of Defense Spending


There are some nations in the world who manufacture their own defense equipment. However, a majority of the countries outsource their production activity to private companies abroad.

Companies like Lockheed Martin are known to extensively take contracts from foreign governments. Regardless of whether the money is spent locally or given to foreign contractors, the amount of money spent on defense spending is huge. 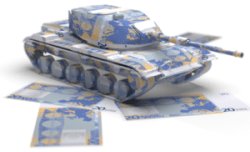 When countries outsource their defense work, there is generally a lot of hue and cry. This is because several critics believe that outsourcing critical tasks make the nation weaker. Foreign companies may or may not supply weapons at the time of war. Hence, the belief is that every country should have its own infrastructure to manufacture weapons. However, local manufacturing adds to the already out of shape national budget.

Also, local manufacturing is not possible for obvious reasons. Firstly, the technology required to manufacture weapons is very difficult to obtain. Hence, countries should buy from companies that already have these technologies instead of wasting their time trying to reverse engineer the weapons.

However, apart from this obvious reason, there are several economic reasons which need to be taken into account before a decision regarding the strategic sourcing of weapons for national defense is made. In this article, we will have a closer look at the pros and cons of defense spending.

To sum it up, there are many pros and cons to defense spending. In order to ensure that this spending does not economically harm the nation, this spending needs to be reviewed periodically.